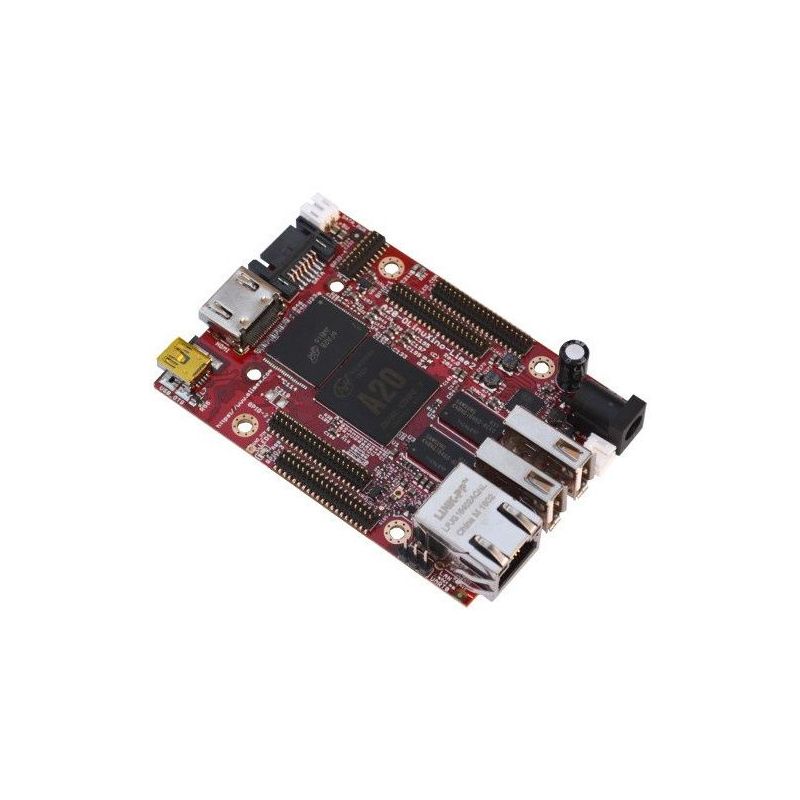 11/22/2016: le Lime 2 is now sold with eMMC memory instead of NAND memory. EMMC memory is known to be more efficient.

Since 2017: Olimex has replaced the fixing notches with fixing holes :-)

Lime 2 is a powerful Linux board based on AllWinner A20 processor, the same processors that equip many tablet models. With components without compromising on quality, this board based on a Cortex-A7 processor offers many inputs/outputs, a Gigabit Ethernet port, 1Gb of RAM, 4 Gb of Nand, a connector for Sata hard drive, an HDMI socket (Full HD video support at 1080p), good documentation and many other very interesting features.

This version of Lime 2 has 4Gb of NAND memory in addition to 1 Gb of RAM memory.
This NAND memory can be used to embed the operating system instead of storing the OS on a microSD card (as is the case for the other Lime 2 board or Raspberry-Pi). It's as if your SD card was integrated directly into the board.

What is the interest of this NAND memory?
An embedded system is intended to be "embedded", in a car, a train, etc. The boards are therefore subjected to vibrations, vibrations wich damage the mechanical elements of your board... such as the micro SD reader. Having a NAND memory welded on the board protects you from these mechanical disadvantages but also from contact problems linked to the invasion of dust.

That said, the NAND memory is also connected to a "bus" with many signal lines , whereas an SD card can't offer a "serial" type communication interface.

Installation note?
Please follow the installation procedure described in the Olimex documentation ("Tutorial" section) to install the OS in the NAND memory.

The use of this board requires a minimum of knowledge in hte field of Linux systems. OlinuXIno boards use Debian Linux from which Raspbian Wheezy (the Raspberry-Pi OS) is also derived.
If you lack experience, we recommend that you start your route with the Raspberry Pi, he will prove to be an excellent teacher.

The pros and cons of Lime2

Are you from the Hobbyist world? Here is some information that you'll certainly find useful.

The Python package for A20-OLinuXino-LIME2 on Debian Linux is called pyA20Lime2. This package considerably facilitates access to GPIO, I2C bus and SPI. It's installed by default on the Debian image. You can find more information and examples on using this library here:

I have no experience and I'm afraid of ruining everything the first time. What are the most common mistakes when starting with the board?
The best approach is to download the latest version of the Debian or Android image from the Wiki of the OlinuXIno board. Just be careful to follow the correct procedure depending on the selected storage support (microSD card or NAND memory). Then make sure the image is properly burned to the SD card or NAND memory. Finally, if you experience video output issues, make sure you have selected the correct settings for the monitor / screen you are using.
Also check that the power supply is adequate (especially if you are powering an LCD / TFT display from the board).

I bought an LCD supported by Olimex and the necessary cable but there is no image displayed when I plug it into my OLinuXino-LIME2-A20. What did i do wrong?
The default Debian OLinuXino-LIME2-A20 image is configured to use HDMI output and HD resolution. To use an LCD or lower resolution you will need to start a shell script on the default Debian image.

How long will the card be available?
Olimex produces its board models as long as the various components remain available.
Since Olimex uses products with reliable supplies, solutions based on the Olimex range are assured of a stable supply.

What do I need to connect an Olimex display to the board?

There are two possible scenarios depending on the display available to you.

The new displays are equipped with 3 40-pin connectors. This allows connections via a single cable with impaction of 1.27mm (0.05 ") OR 2.54mm (0.1"). The impaction of the cable depends on the impaction used on the LCD connector on the board).

What is the current available on GPIOs?
According to the information collected on this thread (support Olimex), it seems that the AllWinner documentation claims that it is possible to obtain 20mA on GPIOs.
This value doesn't seem reasonable (too optimistic for this type of component offering 160 GPIOs) but already gives us an idea of the maximum value.

22 other products in the same category: