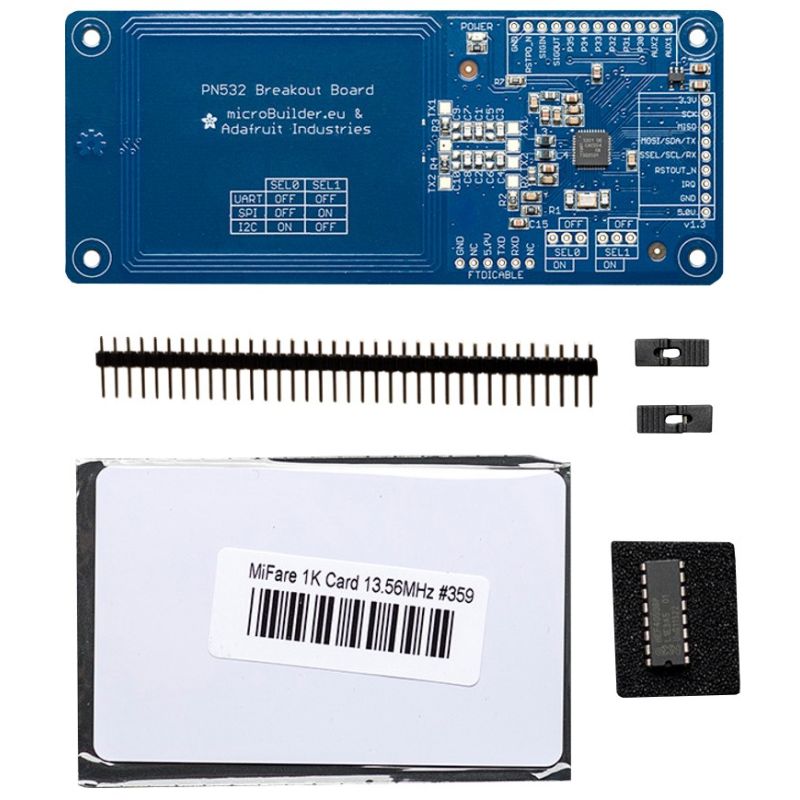 A quality RFID/NFC breakout with I2C, Serial and SPI interface

The PN532 is the most popular NFC circuit and is included in most phones and devices that support NFC. It can do almost anything, such as reading and writing boards, communicating with phones (for payment processing, for example), and 'behaving' like an NFC tag. If you need to do a work/project around the NFC support, this component is what you should use!

NFC (Near Field Communications) allows two peripherals that are very close to each other to communicate together. It's like a very short distance bluetooth which doesn't require authentication. NFC is an extension of RFID, everything you can do with RFID can also be done with NFC. Of course, NFC allows you to do more things like two-way communication with a mobile.

Since it can read and write tags, you can still use this board in tag-RFID-oriented projects. We offer tags that work with this board (see the "accessory" section). It can also work the other types of NFC/RFID tags from type 1 to 4 (and, of course, the other MiFare tags from NXP. DESFire boards are also available)

The PN532 is also very flexible, you can use the 3.3V TTL serial connection (called "UART") at any speed, the I2C or SPI bus to communicate with the PN532. This component is also very well supported by libnfc which you can also compile for Raspberry Pi (see the tutorial section).
You can also connect an FTDI cable and use the FTDI port to communicate directly with the board - this allows you to realize NFC developments on any Linux/Mac/Windows computer!
The board includes an LED indicating the power status, a 3.3v voltage regulator and an FTDI connector for connnecting an FTDI Friend or an FTDI/Console cable and using it with libnfc.

The PN532 breakout board including an antenna on the board (designed for 13.56MHz). A row of connectors (PinHeader) with 2.54mm impaction, 2 jumpers and a level Shifter 4050 circuit (to convert logic levels from 5v to 3.3v). Also includes a Tag Mifare Classic 1K!

This breakout was used by one of our customers to manipulate DESFire tags (significantly more secure than MIFare) intended for critical applications where security is a critical point.
For use with Pi B +, install libnfc and libfreefare.

Special thanks to Mr Sacha V. for his feedback