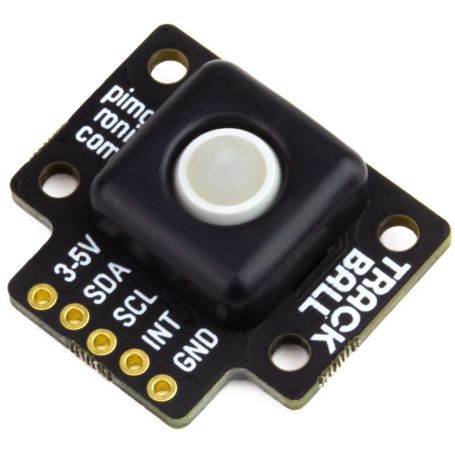 A tiny, RGBW-illuminated, clickable Trackball Breakout that's perfect for adding navigation or control to your Raspberry Pi or Arduino projects

With this product, Pimoroni did combined a smartphone alike trackball module and a bunch of clever engineering to let you creates old-school interaction interface in your projects. This trackball offers x/y directional tracking and clicking. A RGBW (red/green/blue/white) LED is placed right under the trackball to illuminate it.

With this trackball breakout you can create a USB HID device from Arduino (ex: a tiny mouse) or a creative interface to control your new project.

Because the trackball has a grippy rubber surface you can also use it with the trackball facing downwards and track it as it rolls on a surface (like a roller ball mouse).

From the software side, Pimoroni produced a Python library for Trackball Breakout that makes it simple to read directional values, click events, and set the LED colour. Theres a handful of examples of how to read the direction and click, make the LEDs rainbow, and use it as a mouse in Raspbian.

MCHobby did created a MicroPython driver to maje it working with your favorite boards.

Note: the trackball breakout only works reliably with I2C speeds up to 250kHz due to limitations in the Raspberry Pi's clock-stretching implementation

Pimoroni designed this breakout board so that you can solder on the piece of right angle female header and pop it straight onto the bottom left 5 pins on your Raspberry Pi's GPIO header (pins 1, 3, 5, 7, 9).

There's a remarkable amount of engineering packed into this diminutive breakout.

The trackball module itself has a tiny cylinder magnet at each corner that spins and is read by one of four Hall-effect sensors.

There's a tiny dome switch right under the trackball for detecting clicks, and four LEDs (red, green, blue, white) around the trackball to illuminate it.

Pimoroni uses injection-moulded a plastic trackball casing to hold the module in place and protect it. The casing can be popped off to clean the trackball or roller (or to replace the module if necessary).

The Nuvoton N76E003AQ20 Microcontroler under the breakout is used to read the output from the trackball and dome switch as well as controling the LEDs and implement I2C communication.