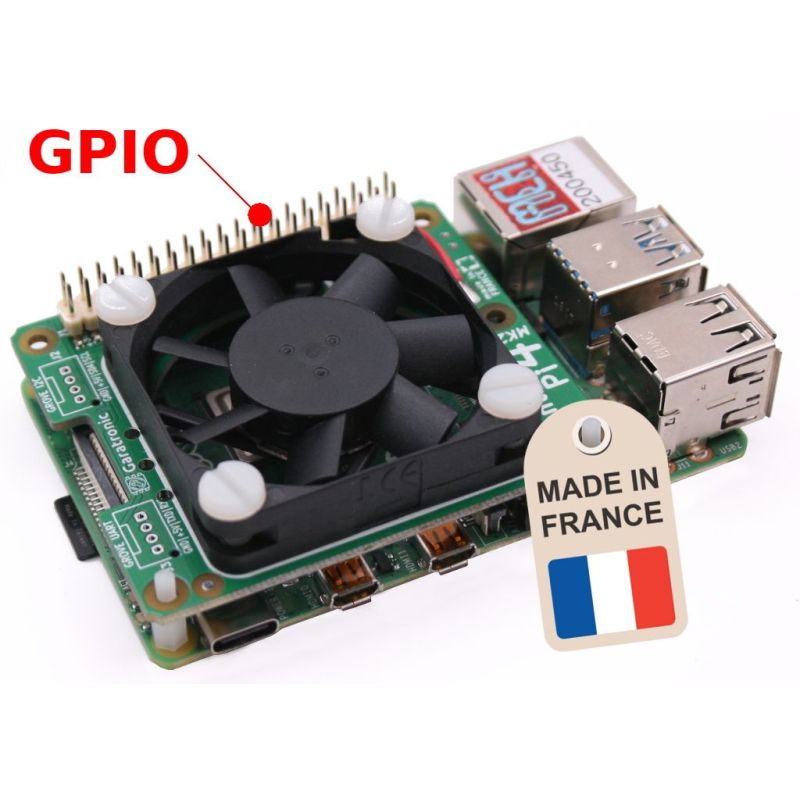 VentilaPi4 - MK3 : offer a quiet cooler to your Raspberry-Pi, good for temperature and good for your ears + GPIO replication

We all know, the Raspberry-Pi 3 and 4 heat... not really embarrassing since they can control their frequency to limit overheating to 85°C (it's the famous Throttling).

On the other hand, if we need a respondent, taking advantage of 100% of resources is important... so we must cool the Pi efficiently.

Here is the VentilaPi4 from Garatronic, which shows that they have thought a little more than our Chinese friends! Long live the French Tech!

What are the Key features:

The errors of the competition

How is the VentilaPi4 better?

Garatronichas also tested the VentilaPi4 with a Pi4 in its case (the case base only). The temperature remains stable at ~52°C despite holding the 4 cores at 100% load for more than 30 minutes!

The VentilaPi4 has of course been tested and offers efficient cooling while remaining remarkably quiet (noise barely noticeable) while ensuring more than 35000 hours of operation (+4 years).

Without active cooling, a Pi4 with open case easily mounts at 50~60°C off load (desktop display, room temp. 23°C).
The use of VentilaPi4 allows to return to 40°C after a few minutes (it is necessary to evacuate the heat accumulated in the board), almost 20°C less... temperature that will be maintained thanks to a sufficient air flow.

In stress test with 30 minutes of calculation on prime numbers (4 cores at 100%), the temperature is max 52°C without case (55°C with the official case, without cover).

Here are some suggestions, from MC Hobby, for optimal cooling.

For each order, you receive an assembled VentilaPi4, screws (including spacers), and GPIO connector. No need to weld, the GPIO connector is inserted in the board :-)

Raspberry-Pi not included. Nut-holders (feet to be printed) are not included but available for free download.

The STL file of the nut-holders (recommended use) is available here.
If you are not able to print it, this product is also available for sale here.