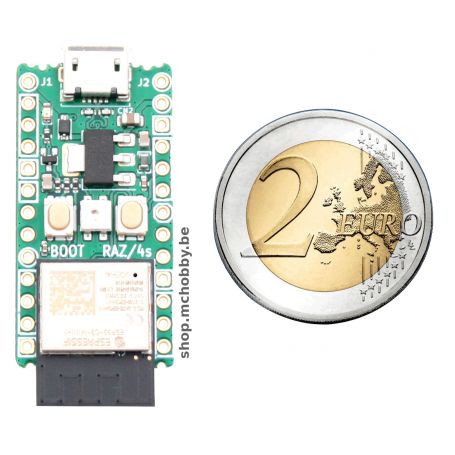 PYBStick26 ESP32-C3: an affordable MicroPython WiFi board for all your connected projects

Here is the new PYBStick from Garatronic, this one is based on ESP32-C3. An ESP32-C3 is an ESP32 with Native USB support. As a result, it is possible to connect the microcontroller on a computer via USB without sacrificing a UART on the ESP32. This also makes it possible to use this board as an USB-Serial converter.

And necessarily, as it is an ESP32, the platform has WiFi connectivity.

With the PYBStick 26 format, we have a standard 26-pin interface offering:

With MicroPython, Flash memory is used to store MicroPython firmware as well as Python files to run on the microcontroller. The card is equipped with the USB connector (type A), which allows the PYBStick to be connected directly to a computer to be programmed... The PYBStick is presented as a USB key, this connector allows the card to be powered but also to expose a serial port to communicate with the computer as well as an interactive Python command interpreter called REPL.

The REPL command interpreter of MicroPython offers the following possibilities:

The platform is initialized with a minimalist script making the LED illuminates in white, blue, red for 10 cycles.
This script can be interrupted by using CTRL-C in a REPL session (or by pressing the [Stop] button in Thonny-IDE).

It is possible to disable the sample script on the platform using the following commands from REPL.

MicroPython does not need any development tools, a simple text editor is enough to write a Python script.
On the other hand, you will need a tool to transmit Python script on the MicroPython platform.
For this you can use one of the following Thonny IDE, MPRemote, RShell, Ampy.

Thonny IDE is a complete and very user-friendly environment that supports many MicroPython platforms.
The other tools are used from the command line (sometimes more intimidating but just as useful).

The MCHobby wiki do contains lots of MicroPython tutorials (written in French) for many plateforms.

L'UART0 doesn't look to be available on the GPIO 20 and 21 (on the default location). However, it is possible to use the UART1 on those GPIOs.