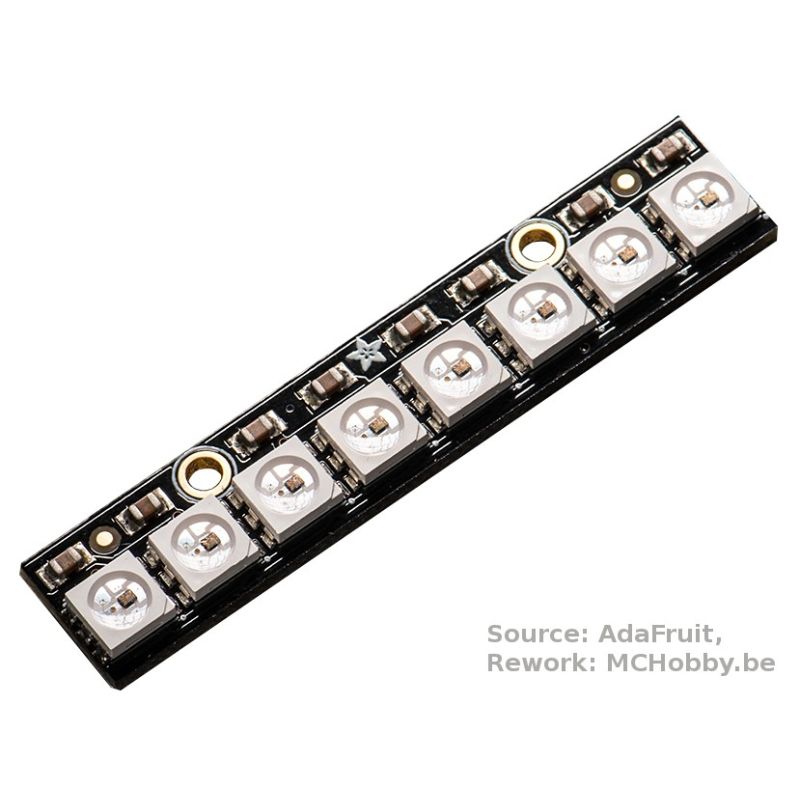 Make your own compositions from these NeoPixel LED sticks. AdaFruit piled up 8 intelligent 5050 RGB LEDs (5mm x 5mm) on a small board fitted with fixing holes and designed to be able to chain them together.

The LEDs can be chained together by connecting the data output of a stick (DOUT) to the input (DIN) of the next stick - see the photographs above. There is only one data line with a protocol using a very strict time base.

Use only one pin of your microcontroller to control as many LEDs as you want ... all that remains is to chain the rings together! Each LED is addressable independently of the others thanks to the chip (the driver) which is in the case of the LED. The LEDs have a constant current driver of around 18mA, which ensures a stable and consistent color even if there is a voltage variation. No resistance needed to limit the current ... which allows for really very thin designs.

Power everything with a 5 Volt DC power supply and let's go (works between 4 and 7V DC).

The protocol used requires very very high precision in time management and can only be controlled by microcontrollers that can achieve an accuracy of 100ns (over time and reliably).
AdaFruit offers code examples using an Arduino Uno/Mega microcontroller at 8MHz and 16MHz but this doesn't work with a Raspberry Pi, Basic Stamp, NETduino or any other machine based on an interpreter or virtual machine whose speed is less than 8 MHz.

Delivered in the form of a ring with 12 RGB LEDs individually addressable. Assembled and tested.

Here are some ideas for using a NeoPixel stick.

24 other products in the same category: