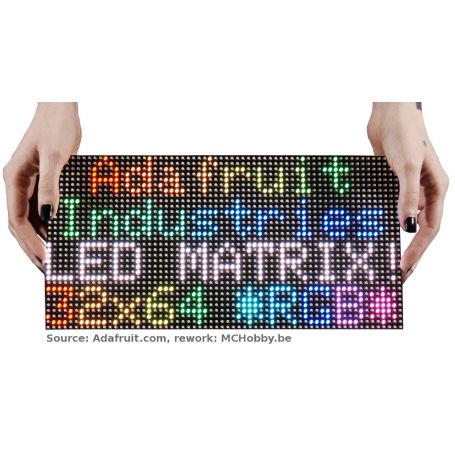 A nice 64x32 RGB matrix to display messages and data

You would like to add a display to follow the news, actions, or other info in your home... a display of the kind found in Time Square (USA) or Piccadilly Circus (London) but in the size of your living room? You will certainly fall under the spell of this RGB LED Matrix. These displays are normally used to make video walls. In New York, these panels are even used on the bus side and at bus stops, they are used to display animations or short video clips.

This version of the RGB 64x32 Matrix has LEDs placed every 5mm. Note that it isn't possible to drive such a large matrix with an Arduino UNO! Use an Arduino Mega, Raspberry-Pi, BBB or other device with enough memory to drive such a device.

The matrix is composed of 2048 bright RGB LEDs arranged in a 64x32 grid at the front. The back is equipped with two IDC connectors (one for the signal input and one for the output). In theory, these panels are chainable and 12 latches 16-bit can control the display with a refresh rate of 1:16.

These displays are technically 'chainable' - Connect the output of one to the input of the other - but the Arduino code examples produced by Adafruit don't yet support this feature.

These panels require 13 digital pins (6 data bit and 7 control bit) as well as a good 5V power supply. Each panel can consume up to 4 amperes.

Keep in mind that these displays are designed to be driven by FPGAs or other fast processors: they don't have PWM control (of any kind). Instead, you are supposed to redraw the screen again and again to perform a 'PWM control' manually. On a 16MHz Arduino Mega, it is possible to manage 12-bit colors (4096 colors) with 40% CPU usage but this display will only offer the best of itself only when it is controlled by micro controllers multi-core, FPGAs, CPLD, Propeller, XMOS.
The good news is that the display has a white balance 'preconfigured' with a nice uniformity... so that if you turn on all the LEDs, the white is fairly faithful (little tinted).

You will find a tutorial of connection and use (with Arduino library and examples) to display pixels (point), lines, rectangles, circles and tests. You should be able to produce sparkling colors within the hour! On an Arduino, you will need 16 digital pins and approximately 3200 bytes of RAM to store a 12-bit color image (4096 colors). 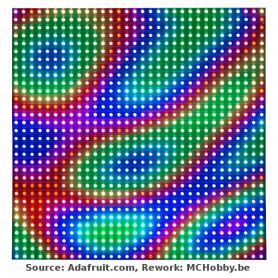 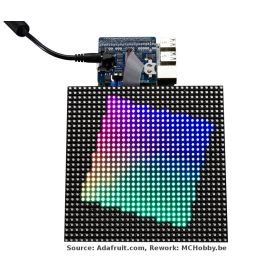