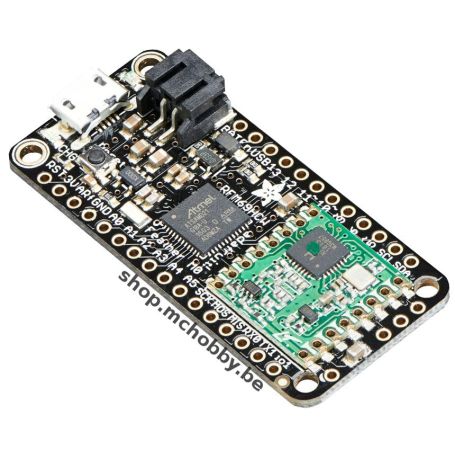 It's magic to transport data over a long distance thank to the the easy to use the RadioFruit. It is even better, a microcontroler is already coupled to the radio module in order to create a ready to use measurement plateform.

This product includes a Feather M0 (like the Arduino Zero) and a RFM69HCW module at the 868 MHz frequency! The radio modulate the packet radio with FSK  +20dBm and include some extras like encryption, auto-retransmit. With a single wire antenna, the radio module can already transmit up to 350 metres (in clear vue area). With a proper directional antenna and parameter tweaking, the distance can be greatly increased.

Feather is the new form factor standard for embeded project designed by Adafruit. Feather boards are light, thin and designed to incorporate microcontroler's base project enverywhere. The Feather family inludes lot of microcontroler cores, lots of communication technologies and lot of extensions. Don't hesitate to check our Feather category on the shop.

This version of the board includes a RFM69 868 MHz based radio module. You can use for radio transmission (the exact frequency and encryption keys are determined when the software is loaded). Notice that the product also exists in the 433 MHz with the same version of radio chipset!

The microcontroler propelling this board is a ATSAMD21G18 ARM Cortex M0 (M0 for short) running 48 MHz with a 3.3V logic. The M0 is exactly the same microcontroler than Arduino Zero. This microcontroler embed 256 KiB of FLASH (8x Atmega328 or 32u4) and 32KiB of RAM (16x as much)!

As the M0 includes a native support for USB, there is no need for additional FTDI chip to program and debug your projets.

Like any other Feather plateform, this board includes a connector to plug 3.7V Lithium polymer batteries and also have the charging circuitery to recharge the LiPo when the Feather is plugged onto an USB source. The Feather will automatically switch over to USB or LiPo power when its available (the LiPo is not necessary to make this board running proprely).

The packet radios transmissions are more simple than WiFi or Bluetooth Low Energy (BLE). No need to scan for networks or to make pairing (as with Bluetooth) or configure the WiFi parameters. Thank to packet Radio, we can emit data over the air without worry about the pairing and WiFi connexion. All the other module listening on the same frequency (and having the proper encryption key) can receive the messages. Then, the receiver can send a response.

The board is populated with a specialized radio breakout circuitery taking care of the packet radio transmission,'auto-retransmit and data correction.

This breakout work great with microcontrolers (like Arduino) fitted on the board. The board can be used to collect the data in the neighborhood or in the town. The constraint with those radio board is that you need at least 2 identical radio breakout (emitter and receiver, you can also use more than 2 board) using the same frequency.

The packet radio modules does exists in 4 flavours:

The RFM69 modules are easy to use. RFM69 is well known and easy to use (LoRa boards are more powerful but also more expensive).

The Feather M0 Radio uses the extra space of the board to include the RFM69HCW 868MHz radio module. These radios work very well to transmit small data packet but are not good for transmitting audio or video content. They will be a nice alternative when you need more range than 2.4 GHz (BT, BLE, WiFi, ZigBee)

Comes fully assembled and tested, with a USB bootloader that lets you quickly use it with the Arduino IDE. Also include some headers that can be soldered on the board to plug it onto a breadboard.

An antenna is required to make this product working properly. The antenna can be a small piece of wire soldered in the antenna hole or solder a µFl connector or SMA connector to connect an antenna in the state of art! 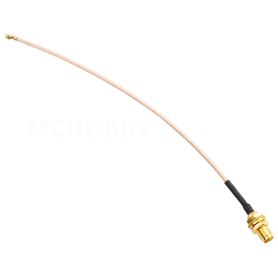 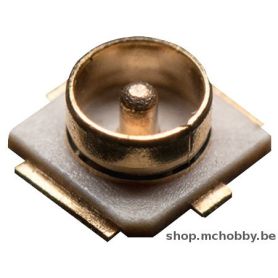