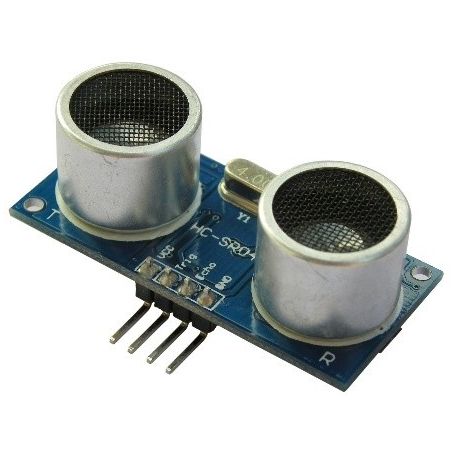 The HC-SR04 is an ultrasound module allowing the evaluation of a distance from 2cm to 400cm. The measurement is made "contactless" and has a precision of 3mm under optimal conditions. The module includes a transmitter and an ultrasonic receiver as well as an electronic control. The operation of this module is similar to that of a submarine sonar and its implementation is relatively simple.
Unlike our other ultrasound module, HC-SR4 is not autonomous and requires the use of an Arduino (or other microcontroller) to work.

Functional principle of the module:

The estimated distance = time during which the output signal is high x the speed of sound (340m/s) / 2.
If the output pulse time is less than 60ms, you can also use the simplified formula distance_in_cm = pulse_time_µS / 58.