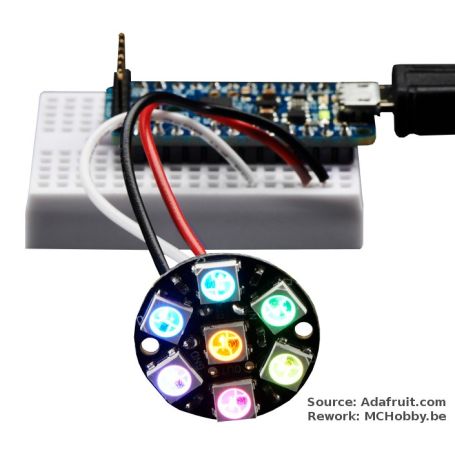 Create a light colored  Jewel with this NeoPixel board tailored forit

The NeoPixel Jewel is primarily designed to be a decorative element! That said, it will also find its place in all other NeoPixel applications.
This product contains 7 NeoPixels (5050, 5mm x 5mm) on a small round card and equipped with two mounting holes. This is probably one of the best NeoPixel cards for wearable projects. Like all NeoPixel cards, it is possible to chain them together.

Use only one pin of your microcontroller to control as many LEDs as you want... just have to chain the rings together! Each LED is addressable independently of the others thanks to the chip (the driver) which is in the case of the LED. The LEDs have a constant current driver of about 18mA, which ensures a stable and consistent color even if there is a voltage variation. No need for resistance to limit the current... which allows to realize really very thin designs.

Power it all with a continuous 5V power supply and let's go.

The protocol used requires very high precision in time management and can only be controlled by microcontrollers that can reach an accuracy of 100ns (over time and reliably).
Adafruit offers code examples using an Arduino Uno/Mega microcontroller at 8MHz and 16MHz but it doesn't work with a Raspberry Pi, Basic Stamp, NETduino or any other machine based interpreter or virtual machine whose speed is less than 8MHz.

Comes in the form of a single round card equipped with 7 individually addressable NeoPixels (breadboard, microcontroller, etc not included). Assembled and tested.