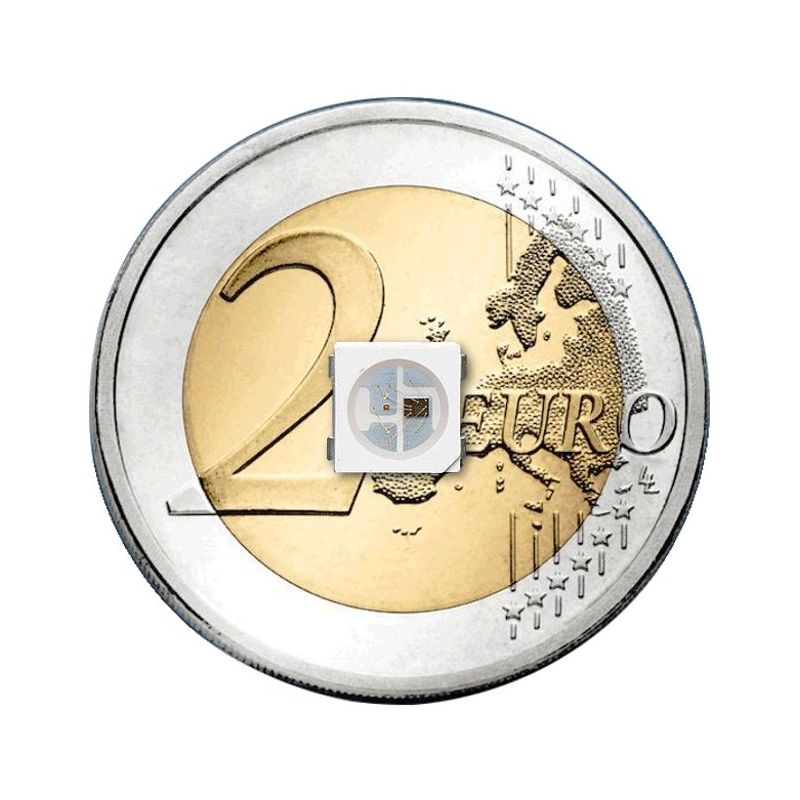 Such Neopixel LEDs are make with 3 internal LEDs (red, green, blue = rouge, vert, bleu) used to creates dazzle light effect. With this CMS product, you can create your own arrangement of RGB LEDs on a PCB by using the same LED package than used with NeoPixel Strips, Ring and Jowel.

This version of the LED package is a white package! Shipped into a bag of 10 LEDs that you can solder on your own board. We do also have lots of NeoPixels products on our shop!

When turned on, the LED produces a tremendous amount of light, enough to hurt your eyes. All LEDs can be controlled using an 8-bit PWM controller (8 x 3-channel = 24-bit to set the color).
A great productl for creating colorized lighting on your project!

Such SMD (Surface Mounted Component) LEDs use a fairly easy to solder 5050 (5mm x 5mm) package. They represent one of the most interesting options to integrates multiple very bright LEDs in a small footprint. You can use the 5050 LED breakout board if you want to make prototypes with these LEDs. Simply solder the LEDs to the boards and you are ready to start your prototype.

NeoPixel LEDs use an 800 KHz protocol. The protocol requiring very strict time control during signal transmission. On Neopixels, the PWM frequency is 400Hz, which works well but noticeable when the LED is moving. For comparison, DotStars LEDs use a PWM frequency of 20 KHz, and no pixelation is noticeable when the LED is moved. (We recommend the use of DotStars LEDs if you have moving LEDs).

NeoPixels are LEDs with the size 5050 and containing a tiny microcontroller under the LEDs. Thanks to it, it is possible to fix the brightness of each of the Red / Green / Blue LEDs. Each Neopixel LED acts as a shift register, reads incoming data on the input pin, and sends the previously received data to the next LED (via the output pin). By sending a long string of data, it is possible to control an infinity of LEDs. The PWM controller included in each LED makes the NeoPixels fully autonomous. Once the brightness / color has been communicated to a NeoPixel, all communications can cease because the LED is autonomous and can display a steady colors without further communication from the microcontrôler.

We do have a very complete tutorial on the NeoPixels leds usage (wiring, power supply, consumption calculation, example code, etc.). Do not hesitate to read it! Please note, it will be necessary to use the NeoPixel library with RGB support. You will get weird results if you try to control these LEDs with the improper NeoPixel 'RGBW' library.
Adafruit's NeoPixel library supports both 'RGB' and 'RGBW' LEDs, but other libraries you might find on the Net may not.

25 other products in the same category: