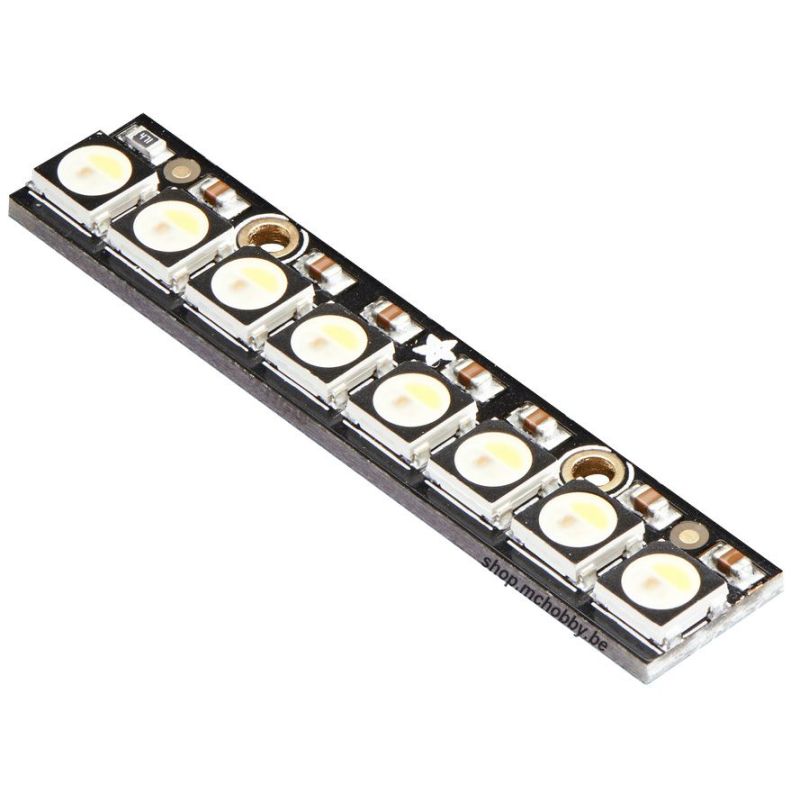 What is better than Neopixel RGB LEDs? A NeoPixel RGB+White LEDs! So this NeoPixel includes 4 LEDs in them (red, green, blue and white) which allow to control the lighting effects with more precision. Recreate white color by balancing the Red, Green, Blue does not offert the ideal white color required for camera and picture capture. In those situation it is better to produce the white light with a dedicated White LEDs... this is the purpose of the RGBW LEDs (the W is for the White)!

Create your own arrangement with this NeoPixel stick.

This is the Natural White RGBW version. The RGBW neopixels also exists in Warm White, Cool White, and good RGB!

The NeoPixel die is made of 2 parts: the left one contains the RGB LEDs and the right part contains a white LED into a yellow phosphor. When white led is off, the yellow phospor look like an egg yolk. When turned on, the white led brights a lot (don't look at it directly, your eye will be hurt). LED intensity can be adjust with 8-bit PWM per channel (8 x 4 channels = 32-bit color overall). Great for adding lots of colorful + white dots to your project!

Adafruit did placed 8 RGBW LEDs (5050 format, so 5mm x 5mm square) onto a PCB chainable by design. As any other NeoPixel product, you can use only one pin of on microcontroller to control as many LEDs as you want! Each contains a driver chip under the LED so each LED is addressable. The LED also includes a constant current driver (~18mA each LED) so the color will be consistent even if the voltage varies. The LEDs are powered with 5V DC (4-7V works) and your are ready to light up your project.

NeoPixel LEDs use 800 KHz protocol with specific timing requirement. Older NeoPixels, used a PWM rate at ~400 Hz, which works but is noticable if the LEDs are moving. In comparison, DotStars use a PWM rate of 20 KHz so no pixelisation are visible when moving the LEDs around, the blending is very smooth (DotStars is recommended if you cant use NeoPixels because of moving parts)

The NeoPixels are 'chainable' by connecting the output of one stick into the input of another. A single data line is needed to drive them all. The sensitive to timing protocol requires a real-time capable microcontroller (it cannot be used with a Linux-based microcomputer or interpreted microcontroller). The Adafruit Neopixel library can be used with Arduino to control thoses pixels.

About colors and Kelvins

Pay attention to the white color because it exists a variety of white like warm white (going toward yellow color) and cold white (going toward blue color like in the fridge). The color is expressed with Kelvin degree (yes, it is a temperature). When a metal is heated at a given temperature its color change in function of the temperature, it is quite common to notice dark blue, orange, yellow, red) and this depends on the temperature. This is why Kelvin degrees are used, it is an absolute measurement unit (a SI unit) common all around the world (not as Celcius or Fahrenheit).  The 0 K is equivalent to -273.15°C.

For each order, you will receive a RGBW stick (8 LEDs) assembled and tested..

Adafruit offers tutorial with wiring, power usage calculations, example code for usage, etc.
Please note you will need a NeoPixel library with RGBW support which is not always available (the Adafruit NeoPixel library does support RGBW).

25 other products in the same category: