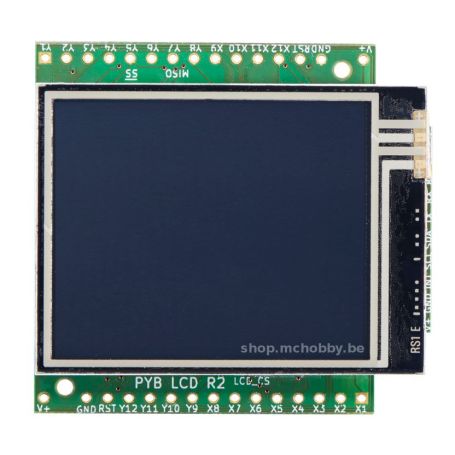 The color LCD skin for Pyboard is simply awesome (have a look to this video on youtube). The LCD module fits right onto the pyboard or the Pyboard-D. Thank to the dual interface, you can plug this LCD screen on the PyBoard original and also use the WBus interface to plug it onto the Pyboard D.

The custom controller on the board can accepts serial commands via the I2C or UART interface. The raw data are received via SPI.
When ASCII or UTF-8 encoded characters are send to the display, the screen act as a simple terminal (the characters are directly printed on the screen and use the current setting for the font and color). New-lines are also handled as some basic ANSI escape codes).
With this terminal alike feature, the display can be used to show the MicroPython REPL (or other serial output).

Advanced special command can be sent via I2C (and UART) to perform many operations on the display like:

The SPI interface of the display can be use to send raw data (pixels data) at a maximum rate of 30 frames per second.

The advanced user would appreaciate the breakout of signals all around the screen. So you could use them with your own project.

For each order, you will receive the LCD screen tested and comes with header pins soldered on the back of the board.
The screen plug directly into a pyboard's female headers.

Here some really useful ressources about this LCD