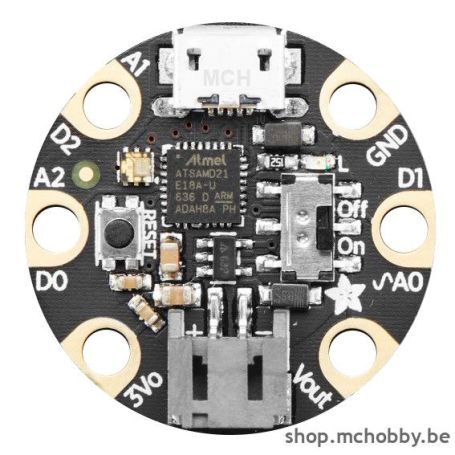 The Gemma M0 from Adafruit is a microcontroller board which is very small but with enough of the features to creates toons of simple projects. Gemma is round and cute, large as coin and with alligator friendly pads.

This little board is propeled with the powerful M0 microcontroler (the ATSAMD21E18) this one is powerful enough to run CircuitPython (a MicroPython flavour) and have an embedeed filesystem inside de Flash memory.

The Gemma M0 will offer a new innovative way to create wearable project! It's just as small, and it's easier to use, so you can do more.

Gemma M0 is exciting because it can be used with Arduino IDE and Adafruit ship it with the ready to use CircuitPython firmware. When the gemma is plugged on a computer, it show himself as a small disk drive containing the main.py file. Edit main.py with a text editor to code your project with Python (the most popular programming language of the world). No software to install, no need for an IDE, no need for a compiler. So you can use it on any computer, any operating system... it will also work with a ChromeBooks.

When your code is ready and saved, unplug the Gemma M0 and your code will go with you.

Feature of the Gemma M0:

for each order, you will receive a fully assembled (and tested) Gemma M0.

The board is shipped with CircuitPython firmware and example code programmed in.