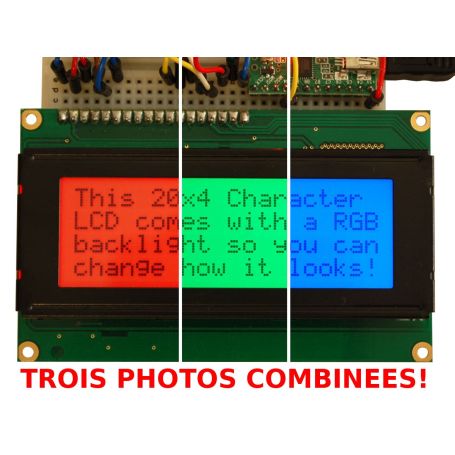 Using a 4 lines color LCD display with your project

This display is a nice upgrade from the standard 20x4 LCD displays. Instead of a blue on white or red on black display, this one offers a display of characters in black on over a RGB background (optional, RGB palette)! This means that you can change the color of the display background at will - red, green, blue, pink, white, purple, yellow, bottle green, salmon, chartreuse, etc. This LCD is surprisingly good and efficient.

The really nice thing about this LCD is that it's a stylish upgrade but it can also be used with a standard LCD project and it will still work - only the red LED will be lit by a project. standard (so it is displayed black character over red background). The two extra pins (17 and 18) are used for the green and blue LED. The LCD integrates the resistors which allows to drive the LEDs directly with 5V logic and the current is about 40mA per LED (it is actually two LEDs per color, 20mA each). The display uses a single point of illumination for the entire display, the image above shows a composite image displaying the three fundamental colors in a single photo!

See the tutorial section for wiring and example code!