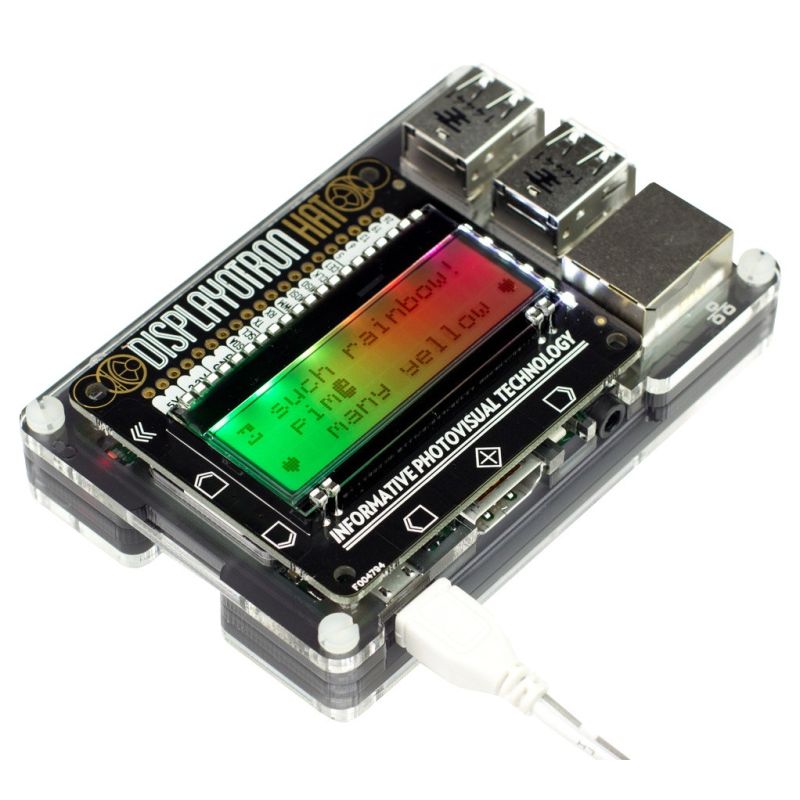 This product is discontinued and replaced with the GFX HAT of Pimoroni.

A LCD display with a progressive colorful RGB lighting

Here is a charming display 3 lines 16 characters, super thin and super slim. It has all the ASCII characters and you can define your own 8 characters (special characters, icons, graphic or decoration).

Add a shimmering rainbow on the output of your "tail -f /var/syslog" with this six-zone RGB backlight. Being a system administrator has never been fun!

The 6 touch buttons (capacitive) are ideal to realize a navigation interface, a menu or an interface of seizure on the screen.

That is not all! There are 6 LEDs organized in "Bar Graph" on the side of the screen, ideal for monitoring the statistics of your Raspberry-Pi like CPU load or memory usage.

Pimoroni thought to make a GPIO pin breakout the most used, it would allow you to integrate them into your project or to connect the sensors. In addition to the GPIOs, you also have the power supply, I2C bus and SPI, UART (serial port) and PWM pin. You also have 5 I/O pins.

Note: For each order, you receive a Hat display-O-Tron assembled and tested. The Raspberry-Pi, cable, case are not included (only used for illustration purpose).