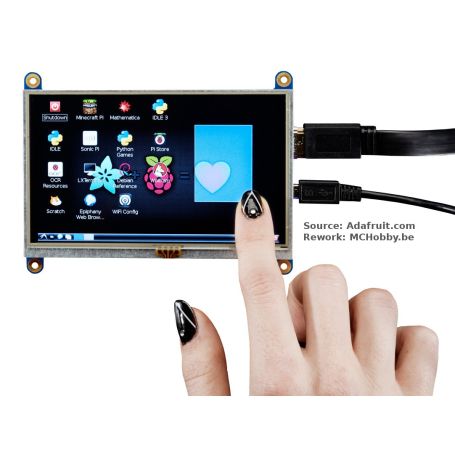 Warning: to use this product on Raspberry-Pi 4, we recomment to read this discussion thread first.

This is a small HDMI monitor designed to be mounted on your projects! Small and simple, you can use it as a display with any computer that has an HDMI port. Its shape and low thickness allows to mount it in cases or on a support. This backpack uses a TFP401 video decoder right behind the screen, which makes it a plug-n-play module (the screen, the decoder card and the fixations form a compact set).

The TFP401 is a very powerful DVI/HDMI decoder produced by Texas Instruments. It is able to accept decrypted videos and pipe out the raw 24-bit color pixel data - HDCP is not supported! HDCP stands for "High-Bandwidth Digital Content Protection"

The 5" display has a resolution of 800x480, which is just enough to run most software, but still small enough to be used in portable projects or embedded projects (without difficulty).

You can even power the screen directly from a USB port. In its default 800x480 configuration and 50mA backlight, the total current consumed is approximately 500mA. It is possible to reduce the consumption to 370mA by decreasing the mid-lighting (25mA). When the backlight is off, the screen decoder consumes only 250mA. If you need a finer control of the backlight, the latter has a PWM input that you can connect to your microcontroller or other PWM output so as to continuously control the brightness at will.

There are two versions of this product: video only and video + touch support. This product have a touch support. A touch version will be available soon. To use the touch interface, you must connect the micro-USB port of your screen to the USB port of your Raspberry (or computer). This micro-USB connection will then be used for (1) the power of the screen and (2) the return of mouse movements (touch interface).

We suggest using this product with nano computers (computers on a simple card) or with desktops/laptops with DVI/HDMI output such as a Raspberry Pi or Beagle Bone Black. You can power the controller via a USB port (as long as your computer is capable of delivering 500mA to a USB port) and then use the HDMI connector for video output. Note that the decoder TFP401 doesn't contain a "video scaler", so it is not able to adapt the size/cut a video on the fly! Your video must be 800x480!

Only TFT screen. Raspberry-Pi and cables not included. Compliance retested at MC Hobby (as of April 1, 2015)