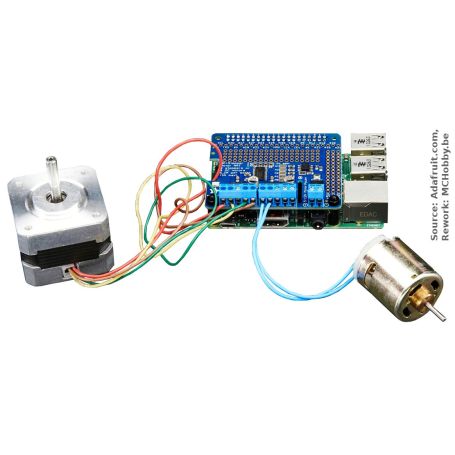 Control motors from your Raspberry Pi with the Motor Hat

Make your robotic projects come true with this new HAT produced by Adafruit.
A great extra for continuous motor (DC) and stepper motor, perfect for any animated or mobile project.
With this card, you can control up to 4 continuous motors or two stepper motors with PWM speed control.

The Raspberry Pi and the motors are not included.

Given that the Raspberry-Pi does not have many PWM pins, Adafruit decided to place a PWM controller on the card to control the direction and speed of the motors. This chip is capable of controlling all motors via I2C. Only two pins (SDA and SCL) are needed... even to drive multiple motors. And since the I2C bus also allows other I2C or HAT devices to be connected to the same pins on the I2C bus.

In fact, it is possible to stack several HAT motors (theoretically up to 32 cards) to control up to 64 steppers motors or 128 continuous motors (or a combination of both). Remember to purchase 40-pin stacking header to replace the connector provided with the product.

The motors are driven using the TB6612 MOSFETs supporting 1.2A per channel with current peaks at 3A. This is a great improvement over an  L293D H-Bridge and there are also anti fly-back diodes (coasting).

Adafruit also had the good idea to add a protective FET on the power pins (protection against accidental reverse polarization) and since there is a little space available, it has been converted into a prototyping aera.

Like all Adafruit products, the HAT is delivered assembled and tested. You will still have to weld the 40-pin connector sold with the product (or a stacking header that you can buy here) and terminal blocks. It is an easy operation that should not take more than 15 minutes.

HAT delivered assembled and tested, with terminal block and 2x20 connector. Some welding operations are required to place the included 2x20 connector (or a Stacking Header not included).

The Raspberry-Pi, motors, battery pack are not included... but we have many motors and steppers motors in our range "motors & robotics". See the tutorial section for more information on.