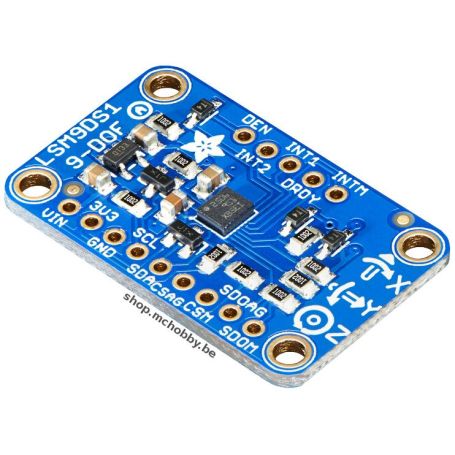 A motion, direction and orientation sensor for Arduino projects

Add motion, direction and orientation sensors to your Arduino projects with this all-in-one 9 degrees of freedom sensor (9-DOF sensor). The integrated circuit contains three sensors, one of them is a classic 3-axis accelerometer, capable of indicating the direction relative to the center of the earth (by measuring gravity on 3 axes) OR of quantifying the acceleration of the board in a 3-dimensional space. The second sensor is a 3-axis magnetometer capable of detecting where the strongest magnetic field comes from, usually used to detect the north magnetic pole. The third is a 3-axis gyroscope (wikipedia) capable of measuring the angular position (measurement of spin and twist). By combining the data you can REALLY orient yourself.

When Adafruit fell on the LSM9DS0 (the LSM9DS1 is the last proposed revision) of ST micro, he saw the opportunity to make a great breakout for a reasonable price! Design your own activity and travel plotters with a wealth of data available. Adafruit has created a breakout board that has all the necessary circuits such as a 3V regulator and level shifter (logic level adapter) allowing the breakout to be used with microcontrollers in 3V or 5V logic.

The sensor supports both I2C and SPI buses.

Connecting this board to an Arduino is simple: power supply to Vin and GND ground (between 3 and 5VDC). You then connect the I2C bus to SCL and SDA. Now, you're ready to start!
More advanced users will be able to use the SPI interface (faster), the Adafruit library supports both buses.

Angular speed vs absolute angle - What are these DPS?

The gyroscope returns a measurement in the ranges ±245/±500/±2000 dps. DPS stands for Degrees Per Seconds. These are angular degrees and therefore this measurement in DPS is therefore an angular speed. For example: 360 DPS means one complete lap (360°) in one second, so 1 lap per second = 60 rotation per minute.

A gyroscope tends to keep its orientation, which makes it possible to measure deviations from the "kept" orientation. This information is returned in the form of angular speed indicating the direction of the movement and its speed (this information makes it possible to measure the variation of angular position compared to time). To know the angle, you must integrate the signal during the movement, see this post on futura-sciences.com but the important thing, like on a tablet, isn't to know the absolute angle but the "movement and its amplitude". Indeed, the direction and absolute angles can be deduced using an accelerometer + magnetometer.

A real inertial unit, such as those used in the international space station, provides an angle relative to an absolute direction BUT this type of inertial unit requires very bulky equipment and significant corrections.