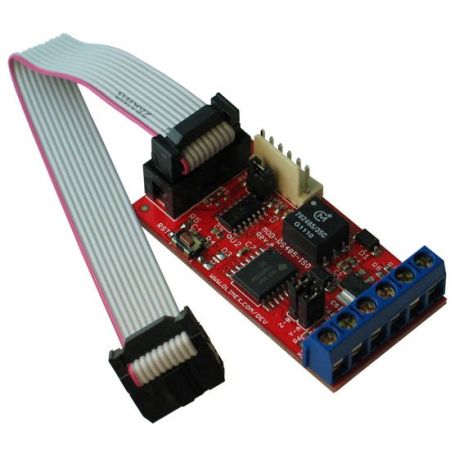 Note: this is the last revision of the module propelled with PIC16F18324

This module can be used to convert RS232 or I2C to a full duplex RS485/RS422. The board is fitted with an UEXT connector and can be wired with Dupond or plugged on an UEXT capable board.

This module is an excellent choice for conveying information over long distances (1200m) allowing an error-free data transmission.

This device if fitted with a PIC16 MCU taking care of the full duplex communication (open-source firmware).
The PIC16 handle on of the both mode:

The PIC16 also brings up the I2C bus (SDA/SCL) to manage the RS485 board parameters and status. The I2C bus can also be used in Bridged mode.

The board is also shipped with Arduino based examples :

I found a very nice example of MOD-RS485 connected to another board in the internet. It doesn't work despite that I use the same setup as the author. What might be different?

There are number of firmware revisions that had been released for MOD-RS485. You should ensure the example you have found used the same firmware revision of MOD-RS485 as the one you have on the module at the moment. Each firmware uses a different board address (0x22 for newer firmware vs 0x48 for firmware 1, for instance) AND DIFFERENT PROTOCOL. Each firmware has a README file inside the source archive that is available for download. Refer to that README for more information about the firmware and its usage.