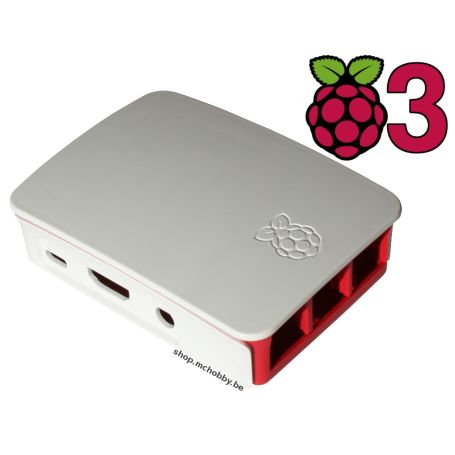 The Pi 3 ans Pi 3 B+ cases are almost identical to the Pi 2, Pi B+ cases. The only little difference lies in the layout to visualize the activity LED of Pi 3 (important for opaque case).
Apart from that, the Form Factor remaining identical, all the Pi 2 cases are also suitable for Pi 3.

After a year of work, the Pi foundation has just announced its latest Pi 3 and the official case that accompanies it.
Although there are many cases available for the Raspberry-Pi, it must be recognized that the cases designed by the Pi foundation could crack more than one tuning fan.

Curved with a well-defined color contrast, the case has a removable cover to access internal components in the case. Although this is pure anticipation on our part, having a removable cover could allow the creation of a cover with integrated Pi camera :-)

The Raspberry-Pi connectors are all accessible

Very appreciable, its possible to twist one of the sides to gain access to GPIO.
The feet are equipped with anti-slip, enough to keep your Pi stable on the table.

Short, a case to protect your Pi while looking after his look.

The official case of the Pi foundation. The Raspberry Pi, Hat and cables not included (used only as illustration)