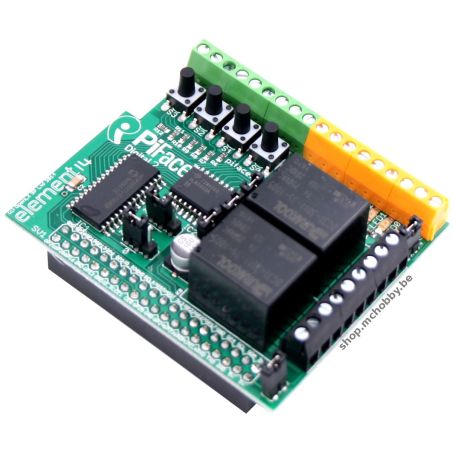 PiFace Digital is designed to be connected directly to the Raspberry-Pi GPIO and compatible with the Raspberry-Pi PLUS using the Stacking Header (included for free, see here), allowing you to be sensitive and control the world surround. Already assembled, it is ready for use in a few minutes.

The PiFace 2 can still be plugged on the Raspberry-Pi 4 GPIO. It is not perfect but functionnal.

With PiFace Digital, you can detect the status of a switch, a door contact, a pressure pad and all other types of switch sensor.

Once the state is detected, you can write your own programs for Raspberry-Pi that determines how your Pi should respond to this action from the outside world.

You can drive power motors, actuators, LEDs or anything else you want.

MC Hobby offers the PiFace with translated documentation, augmented by us and freely accessible. Buying your PiFace at MCHobby also means supporting our translation efforts.

Assembled. Connects directly to the GPIO of the Raspberry-Pi... no need for soldering iron :-)

Raspberry-Pi B PLUS compatibility