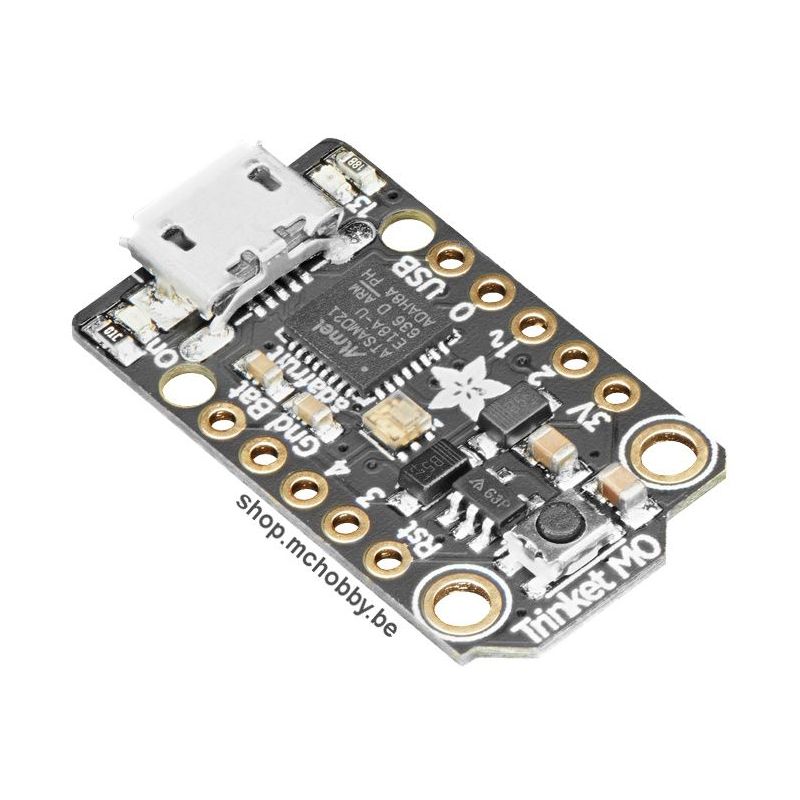 The Trinket M0 from Adafruit is small but incredibly powerfull! It's a tiny microcontroller board propelling the ATSAMD21, this little Atmel chip offers a bunch of power and ressources to your project. This board is designed to to be small enough to fit into any project and low cost to use it everywhere without getting worry about the price. Keep your expensive development board for prototyping and use this mini-microcontroler to turn your project into a final setup.
The Trinket M0 is the cheaper CircuitPython programmable board!

This new Trinket keeps the same form-factor than those used for the ATtiny85-based Trinket... the same size but seriously upgraded. On the Trinket M0, a ATSAMD21E18 Cortex M0 did replaced the ATTiny-85. The ATSAMD is smaller, easy to use to also allow you to do more with this single chip.

Arduino IDE compatible: the most interesting feature of Trinket M0 is that it can program it with Arduino IDE. Like the Trinket, Feather and many other Adafruit's board, you can leverage the power of Arduino environnement with your favorite board :-)

CircuitPython ready: The board is delivred with CircuitPython flashed on the board. CircuitPython is de tuned MicroPython including tons of stuff to facilitate electronic prototyping with python script. The board will show up as a very small disk having a main.py file on it. Edit the main.py to add python code with your with your favorite text editor and you are ready to make your electronic project running with python code. Python is one of the most popular programming language in the world.
With CircuitPython, no need for installs, no need for IDE, no need for compiler! You just need a computer, even ChromeBooks able to edit text file. When you're done, just unplug the Trinket M0 and your code will go with you. Please check out the Trinket M0 CircuitPython guide for a list of capabilities and quick-start code examples - CircuitPython is easier to code but not as low-level and complete as Arduino.

Here are some of the updates you can look forward to when using Trinket M0:

This board is really very small and still include mounting holes!

For each order, you will receive a Trinket M0 fully assembled and tested with Circuit Python flashed on the board and example code programmed on the board.

10 other products in the same category: