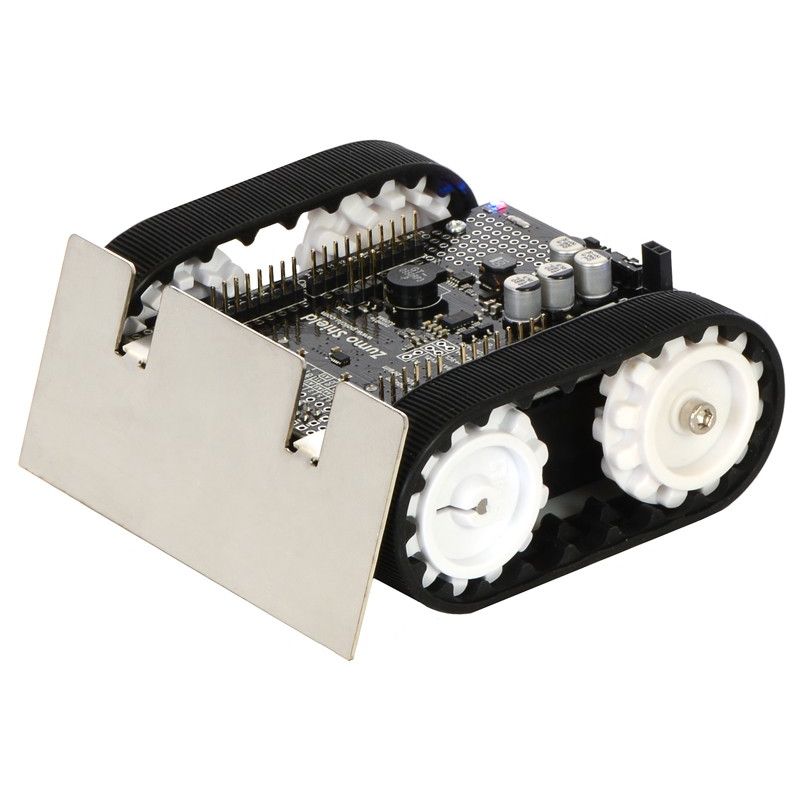 This product is being translated

To make the difference, this Zumo robot for Arduino is sold..

Only your Arduino Uno or Leonardo is missing ;-)

The Zumo robot is a tracked platform with a very low profile and designed to be used with an Arduino (or compatible) micro-controller. It measures less then 10cm side and is about 300gr (with Arduino and batteries), 165gr without anything (as it is shipped), it is therefore small and light enough to participate in Mini-Sumo competitions. It's assembled with two 75:1 HP (high power) metal gear micro-motors used to motorize the two tracks, thus providing impressive torque with a maximum speed of 60 cm/s. These characteristics make the Zumo robot more agile than competition robots such as the Sumovore from Solarbotics and Sumobot from Parallax (dixit Pololu) while allowing complete control. The Zumo is equipped with a 0.9mm thick stainless steel blade (laser cut) mounted at the front of the chassis allowing it to push objects and opponents around. The Zumo is also equipped with a reflective matrix (reflectance sensor array, more information at Pololu) specially designed for the Zumo. This matrix, mounted under the robot just behind the blade, allows the Zumo to make various types of detection on the ground (ex: detect a line, texture, an edge to avoid, etc). 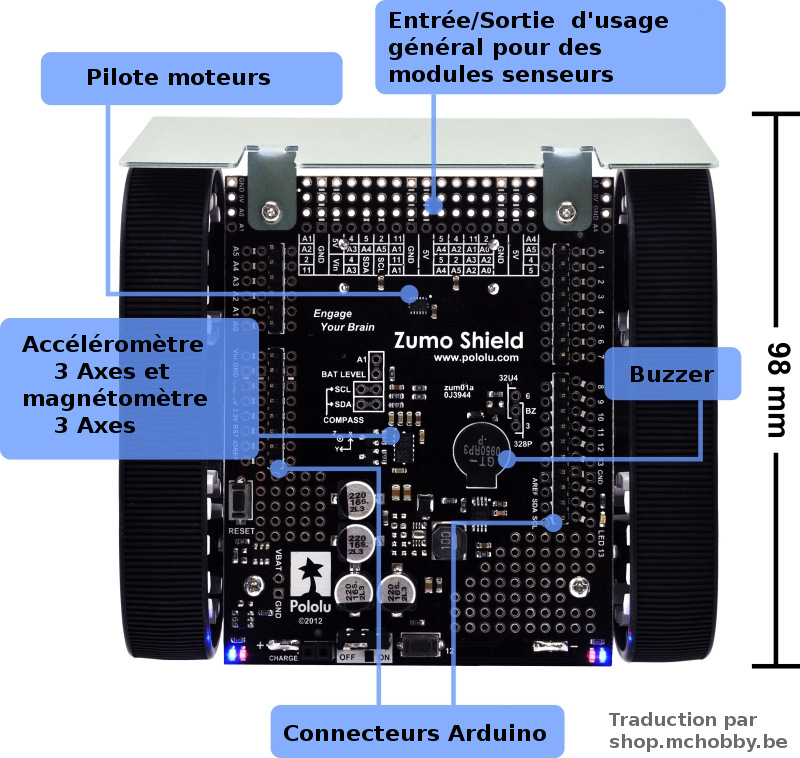 The Zumo control electronics already assembled on the robot is, mainly, a shield for Arduino Uno or Leonardo which can be directly connected to the male pins visible on the upper surface of the Zumo (your Arduino is placed "upside down" on your Zumo). Zumo isn't compatible with Arduino Mega and Arduino Due but can be used with older Arduino using the same I/O interface as the Uno (for example the Arduino Duemilanove). The shield includes a motor driver (for two motors), a buzzer for playing sound and music, a user push button, a 3-axis accelerometer and a compass. It also boosts the supply voltage of the batteries to power your Arduino and the I/O pins of your Arduino remain available thanks to its breakout with practical access.. thus allowing the mounting of additional sensors. You'll also find a Reset button and user LED. 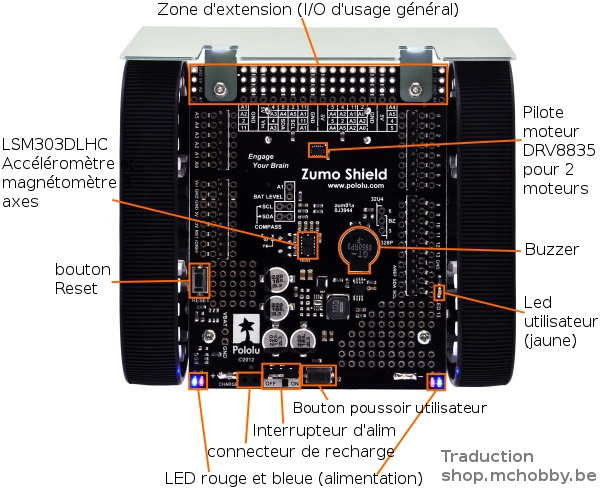 Pololu's Zumo library for Arduino allows you to make programs that easily interface with the hardware integrated into the platform. The library includes examples that show how to use the Zumo elements: the reflectance array, push button, buzzer, motors. Pololu has developped an Arduino LSM303 library which makes it easier to interface with 3-axis accelerometer and magnetometer (LSM303D) using an Arduino. Also includes an L3G library for Arduino (the L3GD20H gyroscope)

The product is shipped as shown in the product image: no assembly or welding step necessary. You need an Arduino (or compatible controller) not included and 4 AA batteries not included.