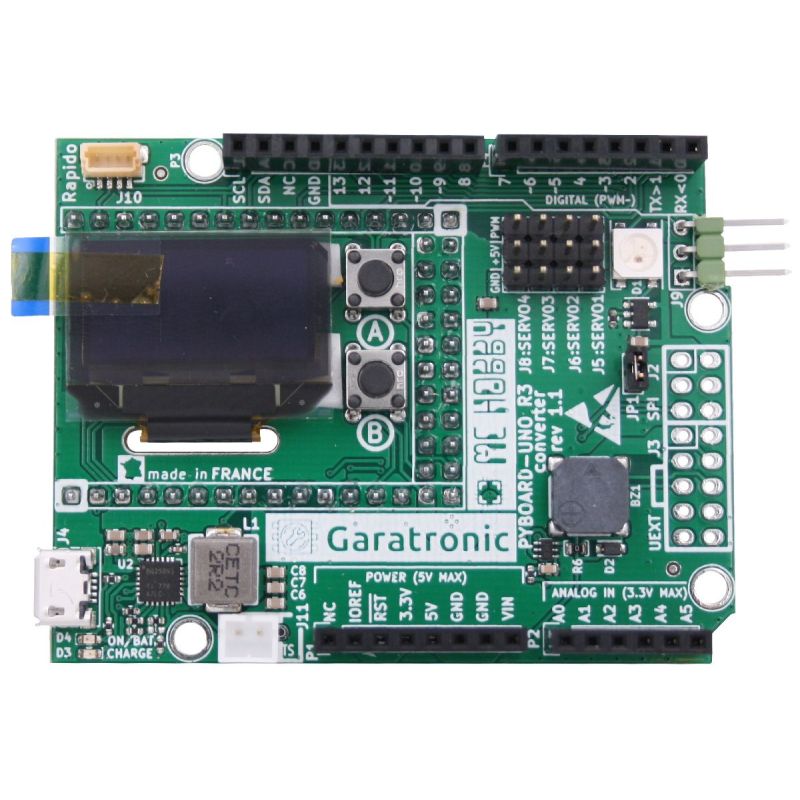 The Pyboard-UNO-R3 is more than an extension board for Pyboard, it has been designed to make electronic and STEM experimentation more accessible to the mass. With this interface board, it is possible to discover the Python programming on microcontroleur with a smooth transition. Just plug it on your Pyboard original.

The Pyboard-UNO-R3 board is the first MCHobby product made in collaboration with Garatronic France. It is proprely documented in French and English.

The Pyboard-UNO-R3 offer the same functionnality as an Arduino Uno (the PWM, Analog, SPI, I2C, ect functions) and they are available in the same pin, great to quickly find your habits with a new microcontroler like the Pyboard. The board pinout graphic also name the Pyboard pin name and also the additionnal function made available by the underlaying Pyboard. The Pyboard-UNO-R3 offers more functionality than its Arduino Uno equivalent.

The board is also desinged as a small learning laboratory, the following features are also available on the board:

On the other hand, the board offer the the following interface:

Attention: this extension board does requires a MicroPython Pyboard originale board to work. The various features have not been tested with Pyboard-Lite version.

Following the "Batteries Included" phylosophy of Python, this board includes somes libraries to ease the usage for the board under MicroPython.

The libraries are ship with many examples to qucikly learn essentials about the board.

The Ni-MH batteries are more sturdy and less dangerous tahn Lipo battery (which can catch fire when if they are twisted or pierce). Using NiMh battery is advertised for young users and learning sessions.

The charger is designed to charge Lipo battery (so charging up to 4.2V). However, with Ni-MH batteries build with 3 batteries would never have the voltage going over 3.6V (3x 1.2V). As a consequence, the reload process would never ends and the battery will slightly heat. That will reduce the lifetime of the battery but will greatly improve the security for your uses.

Note about the charger

As designed, the charger can be power up from its microUSB connector even while the MicroPython board is wired to a computer (via its own microUSB port). So, the Pyboard can be safely programmed while the charger is recharging the battery.

The battery is never recharged from the MicroPython Pyboard USB port.

The MicroPython board can query the LiPo charger, however, it must be powered to respond to the request. So, the charger must be connected to a battery -OR- powered via its microUSB connector.