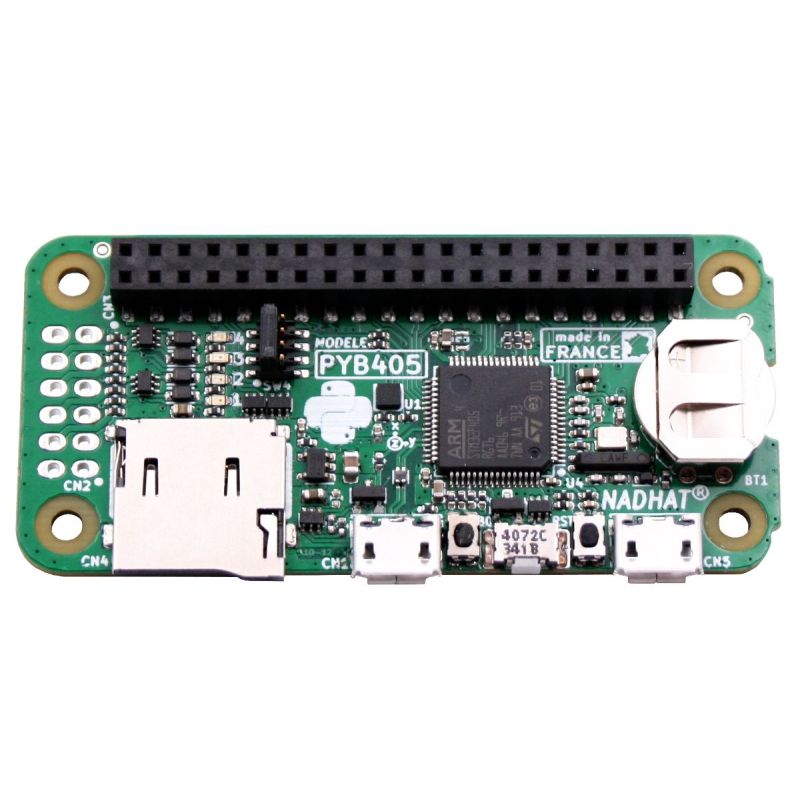 A MicroPython board with a GPIO Raspberry-Pi

When Garatronic discovered MicroPython and fell in love with it, Frédéric wondered what he could do for this work environment. And his thinking led to an interesting project, here is a MicroPython board as the Pyboard (same micro controller) but equipped with a GPIO Raspberry-Pi (2x20-pin).

The relationship with the Pyboard is undeniable... the PYB405 has all the standard elements of a quality MicroPython board:

Frédéric didn't stop halfway! The standard pin functions of the GPIO Raspberry-Pi (Pi 3 B+) are all mapped to the corresponding pins of the NADHAT PYB405. 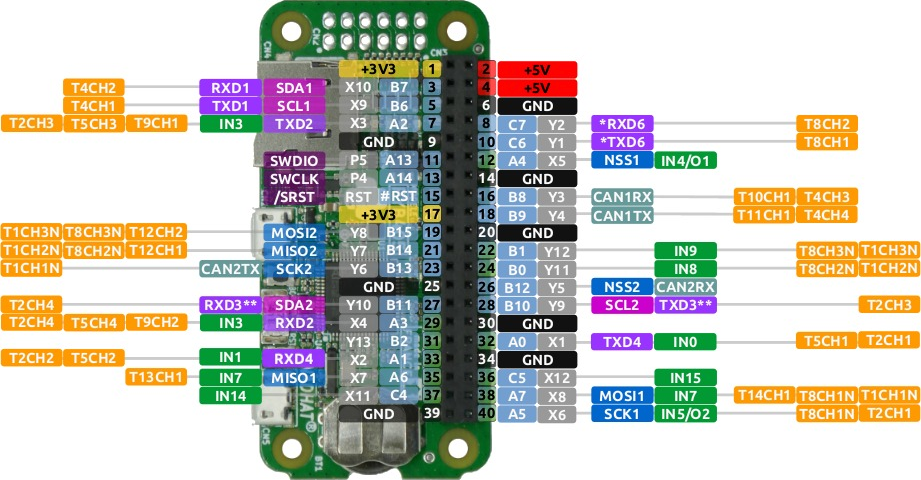 In addition, a jumper makes it possible to cross (or not) the RX/TX lines on the GPIO connector. 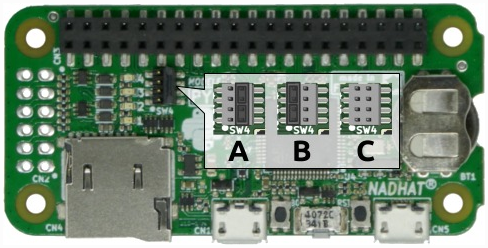 Several ways to use NADHAT PYB405

This approach allows to consider several use cases for this MicroPython NADHAT PYB405 board.

Use the NADHAT PYB405 board to make MicroPython developments from a Raspberry-Pi Zero or a Pi.
This makes it possible to built a fully integrated MicroPython development environment, all you need to do is connect a monitor and a keyboard/mouse and let's go. In this case, the crossing of the RX/TX lines is indicated.

In this case, the NADHAT PYB405 board becomes a powerful micro controller that can be dedicated to specific tasks and, in this way, support a Raspberry-Pi in its higher-level tasks.

Exposing a GPIO with Raspberry-Pi compatible functions is the opportunity to connect HATs on the NADHAT-PYB405 micro controller and with MicroPyhton. As the I2C, SPI and UART buses are well placed, it allows to exploit many HAT directly with the micro controller. As a result, the same HAT can be used in two different environments (on the Pi but also with the PYB405).

Rather intended for advanced users, it is possible to prepare an OpenOCD development chaine on the Raspberry-Pi. This environment will download/upload and debug, from the Raspberry-Pi, the software developped for STM32. The Raspberry-Pi becomes a JTAG probe.
What's admirable in all this is that MicroPython itself is STM32 software and that, therefore, it becomes possible to debug it in SWD with a Raspberry-Pi :-)
Frédéric of Garatronic will certainly have the opportunity to write an article on this subject.

All this is made possible because the nRst pin of the micro controller is connected to pin 15 (GPIO 22) of the Raspberry-Pi. This spoils the GPIO compatibility that allows a Raspberry-Pi to reset the MicroPython board (a necessary evil for doing OpenOCD development).

The board is equipped with a low profile female connector, a very good idea since it is possible to plug directly on the GPIO of the Raspberry-Pi.

The male connector delivered with the board allows to transform the low profile connector into a male connector to connect either HAT... or your own interfaces made on a Hat Perma Proto, a prototyping Hat springton (already designed for this application), a cobbler or any other interface type Raspberry-Pi.

And thanks to this connector, nothing prevents to combine the NADHAT with a stacking header, a GPIO replicator, and all these good things brought by the universe Raspberry-Pi.

The GPIO connector isn't the only good idea of the PYB405.

The board has a second 12-point connector named CN2 (next to the micro SD connector). This one offers:

The 4 inputs are 16V tolerant named IN1 to IN4 are respectively connected to the inputs X19 to X22 (analog inputs of the MicroPython board). A voltage divider bridge with the resistances of 10K and 2.2K. So the input voltage is diveded by 5.54, making it possible to operate 12 V signals safely.

To convert the analog reading to voltage, use the following procedure:

An open-collector transistor acts "like a switch" to connect (or not) a peripheral/load to ground. It's a bit like cutting (or restoring) the power of a device by removing the wire connected to the negative pole of the power supply (I insist... the negative pole!).
A transistor makes it possible to control more powerful elements like motors or relays (attention: 100mA max!!!) and the fact that it is in open collector makes it possible to control these loads with a higher voltage like 12v (50v max!!).
Note that each of the transistors has a protection diode, also called "freewheel diode" (discussed in this tutorial). It is therefore possible to connect relays, motors and other inductive components without putting the transistor and the micro controller at risk.

The PYB405 board has two micro USB connectors. 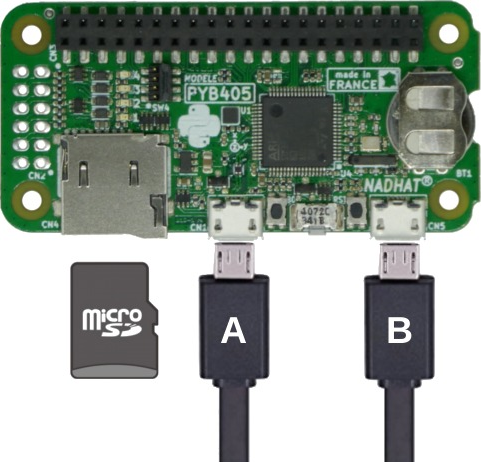 This is good, the PYB405 has a connector for battery CR1225 and the button cell that goes with it.
If you use a tool like RShell (see the MicroPython tutorials on the Wiki) then this one will take care of updating the clock at each connection. 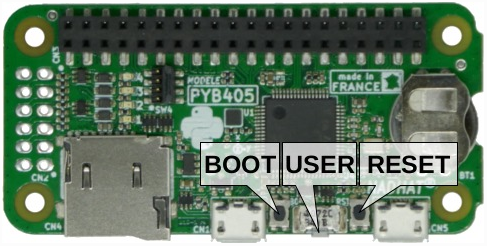 The PYB405 has three buttons:

Note that to activate the DFU mode, press the BOOT button, press and release the RESET button and finally release the BOOT button. Feel free to use wooden skewers (insulating materials!) if the buttons don't seem easily accessible. 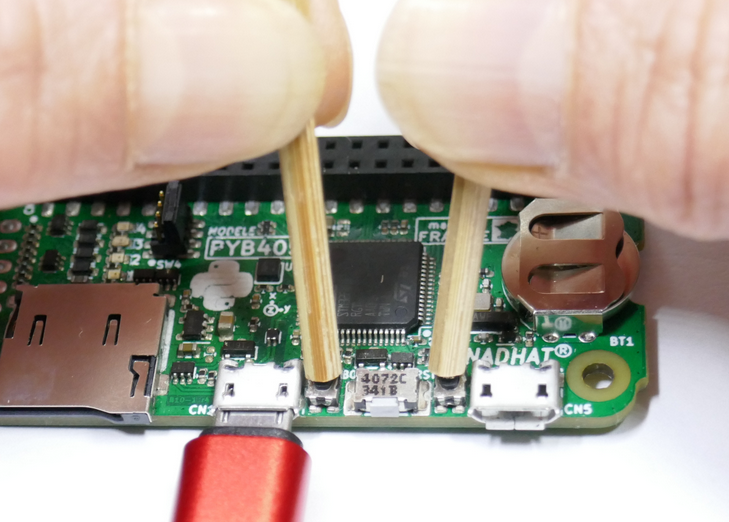 For each order, you'll receive:

MC Hobby also produces drivers to control sensors and interfaces with MicroPython boards.
These are made available