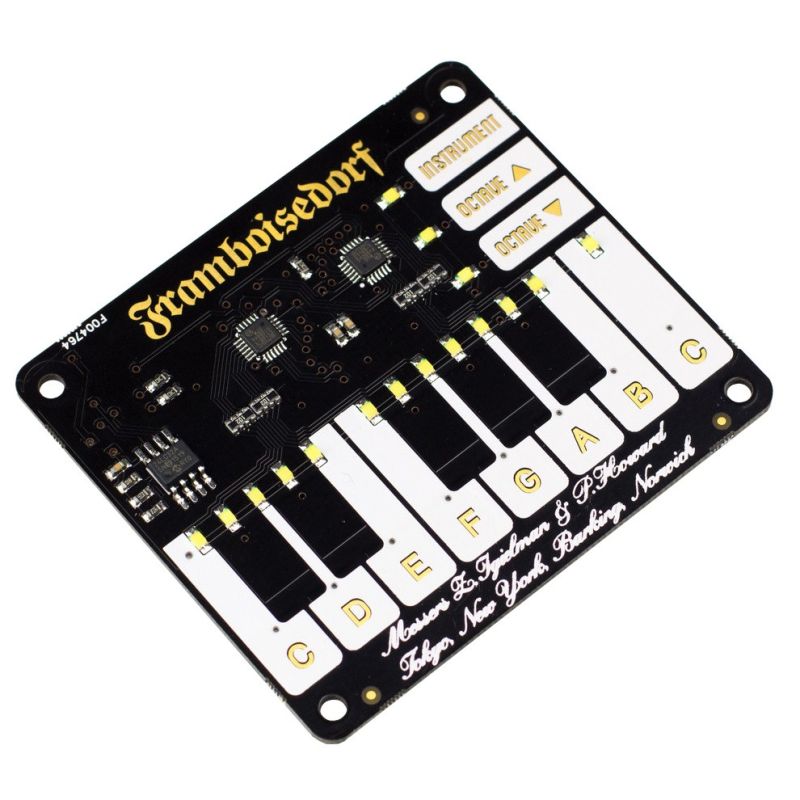 Turn your Pi into a piano or MIDI controller

Release the Mozart in you with the Piano HAT, the ultimate musical companion for your raspberry-Pi.

The Piano HAT produced by Pimoroni is inspired by the project PiPiano made with passion by Zachary Igielman. The version Pimoroni proposes to go further than a "cute little piano", it uses a tactile interface (touch sensitive), a good Python library for hackers, a very beautiful aesthetics as well as an irreproachable finish.

You can use it to play music with Python, control a synthesizer software on your Raspberry-Pi, take control of a hardware synthesizer or surprise your entourage with your creativity!

The Piano HAT is compatible with the Raspberry-Pi 2, B+ and A+. It is delivered fully assembled with examples to get you started quickly.

MCHobby's opinion: behind the Pi-Hat is also a very fun tool to animate activities/courses/programming labs around Python. See the Piano Hat as an innovative interface to stimulate the interest and creativity of our budding engineers.

16 tactile points - each tactile "button" of the Piano HAT can be individually monitored in Python and "plugged" into your own code for crazy experiments or projects you have imagined. Tickle the keys and create a symphony of servos or concerto of... motors.

Octave Plus/ octave Less buttons - extend your playing horizon with two dedicated octave change buttons, or - you know - use Python code to raise or lower the drawbridge of your fortress.

"Cycle Instrument" button - synth players will be happy to learn that it is possible to use this button to send a "change event" to a synthesizer software like Yoshimi. All you need is a few pieces of Python code (see Sandy MAc Donald's article in the tutorial section)!

16 LEDs - Have you ever seen LEDs on learning keyboards? They light up to indicate the notes you need to push (this is a little piano karaoke). Take control of these LEDs and wander through your favorite melodies, or use them to create a visual metronome.

So much sound, really impressive - used with a variety of software -like-hardware synths and play Wav files with PyGame -OR- create your own piano design. Pimoroni has included MIDI files allowing you to play music with software like Sunvox, Yoshimi and others. An example PyGame included some octaves of Piano and some percussion.

Also for Pros! - using Python, you can also cause the Piano HAT makes Standard MIDI commands via USB to a MIDI adapter. This will allow you to take control of the gears of your synthesizer.

Complete Python library, documentation and examples - Take control of your Piano HAT using its GitHub repository. There you will find a Python library, examples for PyGame, Python MIDI and more. See https://github.com/pimoroni/piano-hat