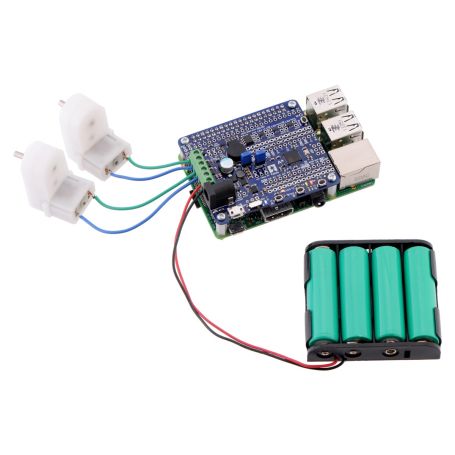 It's the product Pololu "A-Star 32U4 LV Robot Controller with Raspberry Pi Bridge" all ready to be used with the Zumo platform.

This programmable module, combined with a Raspberry-Pi, will serve as a control center for a small Robot or electronic project. It is equipped with an Atmel ATmega32U4 micro-controller preloaded with an Arduino compatible boot-loader. So you can program it as an Arduino from the Arduino IDE environment.
The card includes a motor driver capable of delivering up to 1.8 A per channel, thus making it possible to drive two continuous motors (brushed DC motors). The card is also equipped with a powerful voltage regulator and logic level matching circuit (Level Shifter) to facilitate communication with your Raspberry-Pi (in 3.3V). The voltage regulator can also power your Pi from this HAT.

This product is delivered fully assembled, at MC Hobby, we opted for this model to allow our Makers to start very quickly without having to take out the welding iron.

This A-Star (A* for the intimates) is based on the Atmel ATmega32U4 AVR micro-controller which integrates USB support (inside the micro-controller) and already has an Arduino compatible boot-loader.
It is supplemented by the following peripherals:

If you want to use it as a HAT for your Raspberry, this product meets HAT specifications and can therefore be placed on the GPIO 40 pins of your Raspberry-Pi 2, Model B+ or Model A+. The Level Shifter (Logic level adaptation) make it easy to establish an I2C communication channel and interface other signals between the two controllers. The A-Star will automatically supply the 5V power voltage to the Raspberry-Pi (via the GPIO connector). In this configuration, the Raspberry-Pi can manage the robot's high-level functions while delegating low-level tasks (motor control, sensors acquisition, servo control and time-based peripherals) to the A-Star micro-controller.

Note that you will need a USB A to micro-B cable to program the Arduino compatible micro-controller.

This version of the "A-Star 32U4 LV Robot Controller with Raspberry-Pi Bridge" is assembled and equipped with terminal block connectors and components for use as an expansion card for your Raspberry-Pi (see product images). A 2x20-pin connector (2.54mm, female) is pre-installed on the card and will be used to connect the HAT to your Raspberry-Pi. The power is supplied via a Standard Jack connector (positive center). A terminal block with 6 contact points makes it possible to connect the two motors + the power supply (if you don't use the Jack connector).

This version is delivered with 4 standoffs M2.5 spacers (11mm long), screws and nuts to attach the HAT very easily on your Raspberry-Pi.

Like other Pololu A-Star 32U4 micro-controllers (see full Pololu range), this A-Star 32U4 Robot Controller is preloaded with an Arduino compatible boot-loader (which uses 4 KB of flash memory, leaving 28 KB available for your user program). Pololu offers an add-on to allow the card to be easily programmed from the Arduino IDE environment - AND - an Arduino library to easily take control of the hardware available on the card.

The micro-controller on the A-Star 32U4 Robot Controller card (this product) is the same as the one used for the Arduino Leonardo and Arduino Micro. It also works at the same frequency, so most of the sample codes for these cards should also work on the A-Star.

The A-Star 32U4 Robot Controller (this product) is part of a larger family, the A-Star 32U4 family (some of which are already available at MCHobby) whose members are all based on the same ATmega32U4 micro-controller. This family has a native USB support and an Arduino compatible boot-loader.

The Raspberry-Pi, motors, battery pack and other accessories - used for illustration - are not included!