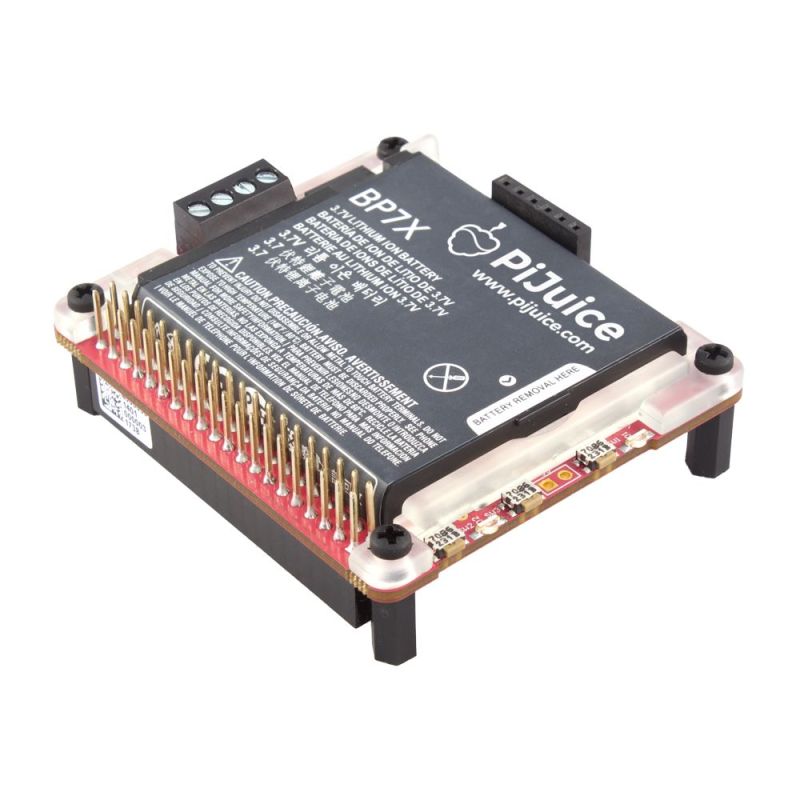 An UPS for Raspberry-Pi

The Raspberry-Pi is one of the smallest computer of the world and it offers so many applications.

Imagine what could be possible if the Raspberry-Pi was self-powered and fully portable. This is now possible thank to the PiJuice!

The PiAnywhere technology will allows the PiJuice HAT to safely switch over the battery when the Pi is removed from power network (or if the power network falls). The integrated real time clock (RTC) allows the Pi to stay at the right time even with no power input or internet connection. The microcontroler on the PiJuice will manage software based shut down, smart startup and low power deep sleep state.

The build-in RGB LED can be used to keep track of the charge level and other information. The 3 programmable buttons allows to trigger events and run scripts. As the PiJuice only request 5 GPIO pins (power and I2C), the remaining of GPIOs are available for your own projet (I2C bus can also still be used for you own projet).

The stacking header soldered on the PiJuice allows you to use the additionnal HATs with the PiJuice.

Thank to the PiJuice, your Raspberry-Pi can continue to run with solar, wind and other renewable power.

Solar, wind, thermoelectric and other renewable power is free, clean, and green and the PiJuice is an affordable and efficient renewable power solution for the Raspberry Pi! PiJuice is self-monitoring and autonomous (like satellite in the space). The PiJuice can be used as part for autonomous camera system, weather stations, power autonomous desktops and so many outdoor projects. Adding a PiJuice solar panels separately can bring your project to be fully autonomous.

Need a bigger battery? Then check out some of the PiJuice battery alternatives that we have in stock.